For those in the injection molding business, we all know that dies are very expensive. Not only are they expensive to have made, but are very expensive to have repaired.  This means the removal and installation of dies into the machine is a critical process.  If the die is dropped, it can lead to many thousands of dollars of repair, or worse yet…it gets ruined.  Die repair shops make a fortune doing repair.  The key here is using a die handler where forklifts won’t fit.

The nice thing about using a die handler is that they have push and pull capabilities.  They can push the die in and pull it out.  Basically, a table rises up to the needed height and then the die is pushed or pulled as needed.  Forklifts can be a little scary for this purpose.  They don’t have a nice table to load on to or off from, nor do they have push pull capabilities.    Of course another option is to use a die cart in combination with a forklift.  However, you may still end up with some scary moments during installation and removal.  Die carts are much less expensive and can handle massive loads. 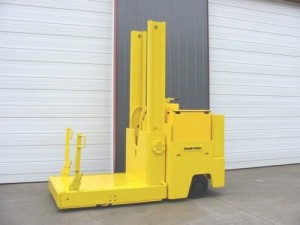 Finding a die handler for a cheap price can be a little tricky.  There aren’t always many available and new ones are very expensive.  Capacities typically range from 20,000lb to 150,000lb.  There are larger versions, however they aren’t very common.  You would likely see the larger capacity models in metal stamping plants and not plastic injection molding plants.

Lathes & Mills For Watchmakers and Clockmakers

“Those who create and repair watches and clocks have very specialized needs. They often require super levels of accuracy that can be either very hard to find in small machines…or very expensive. Because of this, we have introduced special options specifically for super precision needs. What can you now get from us?

You can now get our Heavy Duty Commercial Headstocks with ABEC-9 angular contact bearings. With ABEC-9, can now count on the high end accuracy mainly found in Swiss machines. You can also have the headstock made with using a secondary grinding operation* for a 50 millionth runout. Our most popular model combination for this is the ER25 using the Absolute-Zero adjustable ER nut and our Ultra Precision Techniks collets. The Absolute-Zero ER nut will allow you to dial out any final runout from your collet and/or cutter. With this combination, you can now avoid having to pay $10,000++ for a precision mill or lathe.

We recommend the Taig mill and the Taig lathe as your base machine (we are dealer for Taig and can help you with that, we order the machines without the headstock and motor). You can then use your GlockCNC headstock with Taig adapter for the ultimate machine for watch and clock makers. We also recommend using our motors over the OEM Taig motors. While their motors are good, they really aren’t design to run our larger headstock with much more robust bearings.

** Our most popular combinations for watch makers and repair experts are; ER25, R8 and MT3 with chuck plate, ABEC-7 or ABEC-9 bearings with optional secondary grind operation.”

This article was taking from GlockCNC.com on their watchmaker page.

Cranes, specified as mounted mechanical instruments used to move little and medium sized loads over a short distance, come in a variety of styles including the bridge crane and the gantry crane. The bridge mounted crane is one of the few types of cranes that can not be designed as a commercial vehicle, the other is the gantry crane (likewise referred to as overhead travelling bridge cranes). The bridge crane is made up of a beam that bridges a bay (wall to wall) that moves on 2 tracks installed on either wall.

The dimensions of a generic bridge crane might include the following: Trolley designed for optimum cross slope of 1%, End trucks created for maximum longitudinal slope of 3%, NEMA 4 weatherproofing, Cold weather protection, emergency brakes that will stop the crane in 12′ and serve as a hold down (brake sufficient for a 50 MPH wind velocity), completely bolted construction to assist in erection in addition to disassembly for easy moving, radio push-button controls and a full length catwalk with gain access to ladder on 1 leg.

New and utilized bridge cranes (which are ending up being increasingly popular as an expense effective alternative) represent a notable class of cranes which function with a wheel system suspended from a trolley that travels on tracks that run along either one or two beams that lie horizontal to one another. The beams are called the bridge and they are supported at both ends. More often than not the bridge is mobile along the pair of horizontal rails, allowing the crane to serve a large rectangular location. When it comes to a circular area, a rotary can be used.

Gantry cranes, or overhead bridge cranes, are versions of the crane which lift things by a hoist which is fitted in a trolley and can move horizontally on a rail or pair of rails fitted under a beam. Overhead travelling cranes and gantry cranes are especially suited to lifting very heavy things and huge gantry cranes have actually been used for shipbuilding where the crane straddles the ship permitting huge things like ships’ engines to be lifted and moved over the ship. In overhead, essence or bridge cranes describe a crane with a movable bridge carrying a movable or set hoisting system and travelling on an overhead set runway structure.

Overhead bridge cranes, also called bridge cranes or as suspended cranes, have completions of the supporting beam resting on wheels operating on rails at high level, usually on the parallel side walls of a factory or comparable big industrial structure, so that the whole crane can move the length of the building while the hoist can be moved to and fro across the width of the building.0